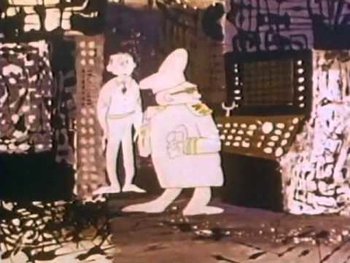 The Hole is an animated short film (15 minutes) from 1962, directed by John Hubley and Faith Hubley.

Two construction workers (one of whom is voiced by famed jazz musician Dizzy Gillespie) are in a hole well below the streets of New York, jackhammering away. While they work they chat idly about things like buying health insurance and the nature of accidents. Eventually their conversation turns to the possibility of nuclear war. The two workers debate the possibility of an accident leading to the launching of nuclear missiles.

Not to be confused with a completely unrelated horror film. Over a decade later, Dizzy Gillespie would lend his voice to another Hubley short, Voyage to Next.