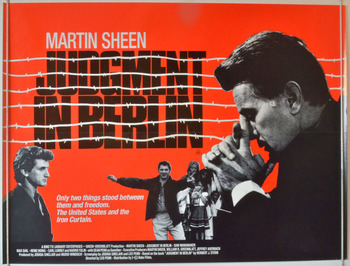 Berlin has a new Judge, and he's not one to be handled.
Advertisement:

Judgment in Berlin is a 1988 film adaption of the non-fiction novel of the same name, starring Martin Sheen, Sam Wannamaker, Sean Penn and Jutta Speidel. The book and the film – which is basically Judge Herbert Jay Stern's memoir of the entire case – depict, according to Stern himself, the most unusual case he ever had to preside as Judge over, the aftermath of the LOT Polish Airlines Flight 165 hijacking

It is 1978, and East Berliners Detlev Tiede (Helmut Thiele in the film, played by Heinz Hoenig) as well as his friend Ingrid Ruske (Siegrid Radke, played by Speidel) try to flee the GDR to the West. Their first attempt – taking a ship from Poland – fails when Ingrid's West German boyfriend is seized with the false papers before meeting them, and so they have the desperate idea of seizing the plane they are supposed to take back to Berlin, forcing it to land in the West. The plan works, but this opens a whole other can of worms, leading eventually the US Court in Berlin (which until then only existed on paper) to convene for the first and only time.