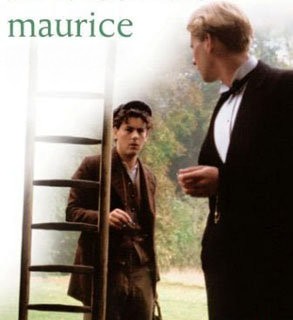 Sexuality clearly not being the only issue here.characters Maurice at right; Alec at left.
Advertisement:

Set in and written during The Edwardian Era, but not published until after the author's death in The '70s, E. M. Forster's Maurice is a novel about the eponymous character, who is perhaps the most middle-of-the-road, ordinary, unexceptional, run of the mill, average middle-class Englishman you can imagine, except that he's attracted to men. This is a big problem, because back then homosexuality was punished as a crime and condemned by society. The book begins with an awkward "all you need to know about sex" talk delivered by a teacher to him as a young boy, setting the tone of heteronormativity and the psychological constraints that Maurice will spend most of the book trying to escape.

Many years later, Maurice is a Cambridge student, still average, until he happens to meet Clive Durham, who becomes his best friend. Clive eventually confesses his love to Maurice, hoping that Maurice will understand thanks to reading Plato. He doesn't. However, after some time to think, Maurice realizes that he loves Clive and they make up, leading to a happy relationship for the next two years. Unfortunately, Clive, who was adamant that their relationship be completely sexless, eventually starts siding more with society's views of homosexuality and decides to drop Maurice and get married to Anne.

Maurice, upset and more certain than ever that he wants to be "cured", sees a family friend, Dr. Barry, who tells Maurice he's talking rubbish and closes the subject. After some time passes, Maurice tries seeing a hypnotist, who tells him there's a small chance he can be cured, but that they can try. Maurice mucks this up phenomenally shortly thereafter by having sex with the under-gamekeeper at Clive's estate, Alec Scudder. Scudder is in fact moving to Argentina in a week, but because Maurice is infatuated, he does his best to persuade Scudder to stay in England, willing to give up his job and social status in order for them to be together. Surprisingly, it has a Happy Ending, defying the Enforced Trope in literature that any gay relationship had to end in death or tragedy, which is why it was written in 1913 but not published until 1971, a year after the author's death.

The book had a 1987 Merchant-Ivory film adaptation which was rather good, starring James Wilby, Hugh Grant, Rupert Graves, and Denholm Elliott.