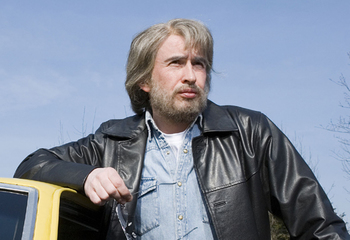 Tommy Saxondale. Not nearly as cool as he thinks he is.
A British sitcom starring Steve Coogan as Tommy Saxondale, an ex-roadie turned Stevenage pest exterminator. Having once toured with most of the great rock bands of the 1970s (though not Led Zeppelin, not that that bothers him), Tommy considers himself to be a maverick free-thinker and independent rebel against the 'straights' and the 'squares'; in fact, he's just an opinionated fool with a trigger-hair temper who's more than a bit stuck in the past and isn't quite the rebel without a cause he likes to make himself out to be. This causes problems for his live-in girlfriend Mags (Ruth Jones), owner of a shop selling 'radical' counter-cultural merchandise, and his quiet lodger Raymond, who find themselves constantly having to dance around his moods. It also means that he's probably not going to be passing the anger management course he finds himself stuck in any time soon, much to his frustration.