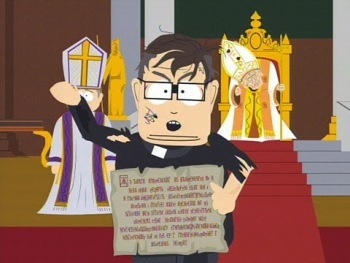 When Father Maxi informs the children about the Young Men's Catholic Retreat many adults in South Park don't want their kids to go, because of all the pedophilia scandals in the Catholic Church. As a result, many convert to atheism. Meanwhile, the children have no idea why they are being asked whether "Father Maxi, at any time, ever tried to put something in your butt" and misinterpret the question, trying to find a way and succeeding to put food into their rectums and defecate through the mouth.

Father Maxi goes to a meeting of Catholic priests in Colorado where he is outraged over the fact that many priests are actually in favor of child molestation. He decides to go all the way to the Vatican and The Pope to settle the matter...

Note: This episode should NOT be confused with "How To Eat With Your Butt", where Cartman's latest prank (putting Kenny's school photo where only his butt is exposed on a milk carton) backfires when an actual couple with butts for faces comes to South Park searching for their missing child and Cartman suddenly blows a "funny fuse," which he thinks is from seeing something so funny that he can never laugh again (but others think is from guilt).