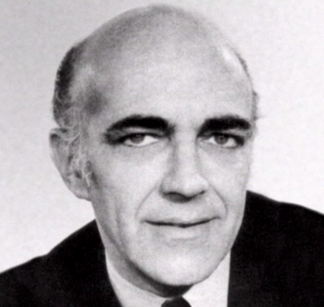 Malcolm Hulke (1924-79) was one of the most influential writers on the first years of Doctor Who in colour.
Advertisement:

His first produced script for the series was "The Faceless Ones", but it was "The War Games", Patrick Troughton's ten-episode finale epic, written in collaboration with Terrance Dicks, that established him as a major writer for the series.

During his time working on the show, he became one of the most influential writers of the Jon Pertwee era, writing the first appearance of Time Lords, and three of Doctor Who's iconic reptile races — the Silurians, the Sea Devils and Jon Pertwee's favourite aliens, the Draconians.

He was also, along with Terrance Dicks, the original writer for the Doctor Who Novelisations for Target Books in 1973. He adapted all but two of his own stories, and Robert Sloman's "The Green Death".

Beyond Doctor Who, he also contributed episodes to Danger Man, The Avengers, The Protectors and Crossroads. He was a member of the Communist Party of Great Britain for some time, though he seems to have let his membership lapse sometime in the early 1960s. Nevertheless, his membership had a lasting effect on his political beliefs and his artistry, as reflected in the content of his Doctor Who stories; the politics of his stories were so pronounced that Michael Herbert wrote a study on the topic, Doctor Who and the Communist: Malcolm Hulke and His Career in Television. He even had an MI-5 file opened on him