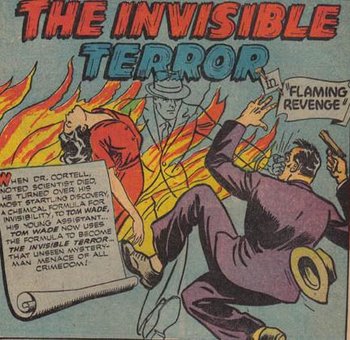 The Invisible Terror is a Superhero from The Golden Age of Comic Books published by Centaur Publishing in C-M-O Comics 1-2.

Tom Wade is a drifter who's recently come under the employ of a scientist. Together, the two make a formula that turns people invisible. A few days later, the scientist entrusts Wade with protecting the formula before dying. Good thing to, because sinister powers are already seeking it...