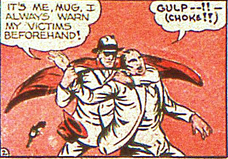 The Wasp is a Superhero from The Golden Age of Comic Books, created by Art Pinajian and published by Lev Gleason in Silver Streak Comics #1-2.

Burton Slade is a reporter who's grown sick of crime running rampant. He put together a caped outfit to go fight crime in secret. Noticing his cape's resemblance to insect wings, Slade decided to go by the codename "the Wasp."

Not to be confused with the more famous Marvel hero.