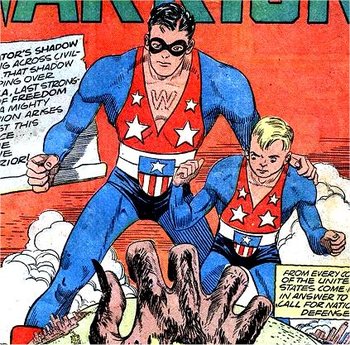 The Lone Warrior is a Superhero from The Golden Age of Comic Books, published by Ace in Banner Comics #3-5 and Captain Courageous Comics #6.

Stan and Dicky Carter are the sons of a scientist, who injected them with a Super Serum before he died. This serum gave them superhuman speed and strength, along with W-shaped scars on their chests. The brothers decide to use their powers to fight evil, with Stan taking the codename "Lone Warrior."