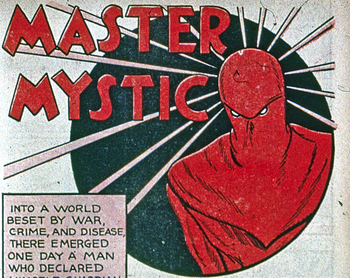 Master Mystic is a Superhero from The Golden Age of Comic Books, published by Pelican Publications in Green Giant Comics #1.

From his tower at the top of the world, the Master Mystic watches over humanity. His goal? To crush evil in all its forms! Using his powers of Mind over Matter, the Mystic disregards all the laws of physics in pursuit of justice! In his sole adventure, he must stop a Mad Scientist's plot of world domination.