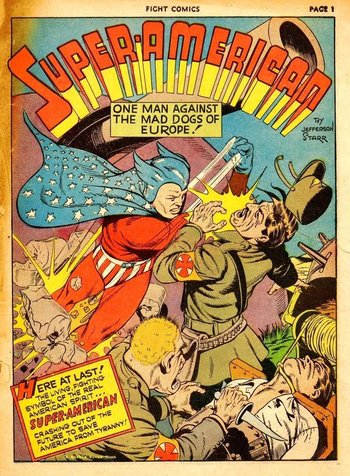 Super-American is a Superhero from The Golden Age of Comic Books, created by Jefferson Starr and published by Fiction house in Fight Comics #15-18.

It's the beginning of the United States entering World War II. In desperation, scientist Allan Bruce tries to contact Americans of the future. Luckily, he finds some from a time where everybody has superpowers. The future President sends back one man, a citizen hungry for adventure. As "Super-American," this man becomes hero to the US of the past.

The character was revived in Project Superpowers. Tropes relating to that version go there.