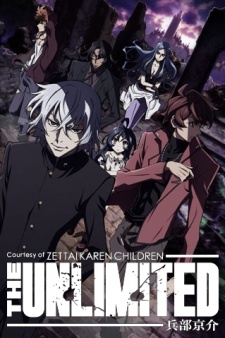 A long time ago, Kyousuke Hyoubu was betrayed.

Unlimited Psychic Squad is the Darker and Edgier spin-off of Psychic Squad, following its antagonist, powerful ESPer, and known fugitive, Kyousuke, as he leads a notorious criminal organization composed of fellow ESPers, P.A.N.D.R.A., through its many trials.

Not all may be as it seems, however, as Andy Hinomiya finds out first-hand when Kyousuke invites him to join P.A.N.D.R.A. on a whim; there's a great amount of prejudice in the world against ESPers, and Kyousuke Hyoubu means to combat it, even with (or especially with) the use of force.

He cares a lot for the espers he saves, but little for the people who discriminate against them...as ever, though, there are people who would disagree with his methods—and they are still watching him, quite carefully.