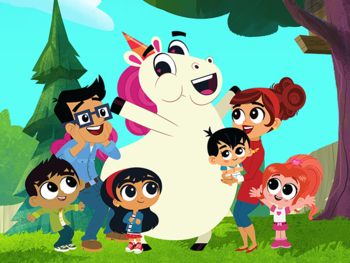 Mytho-zoological.
"When you think he's not around... he'll make you shout out loooud..."
Advertisement:

Go Away, Unicorn! is a Canadian-American animated series based on the book by Emily Mullock, and produced by Sonar Entertainment, with Dan Signer's (yes, that Dan Signer) Gravy Boat co-producing and Nelvana providing animation. The series debuted on YTV on September 7, 2018, and premiered on Disney Channel in the US on March 3, 2019.

The show takes place in the fictitious Unionville, focusing on Alice, a young girl, and her best friend, an energetic unicorn named... um, Unicorn (voiced by Chris Diamantopoulos). Alice is also friends with Ollie, an Indian-American boy whose father could spell in three languages, and Pixie, a happy-go-lucky girl who loves to toss pink glitter about. The two explore their differences together and soon realize that odd friendships can be formed between different people... or, erm, animals.