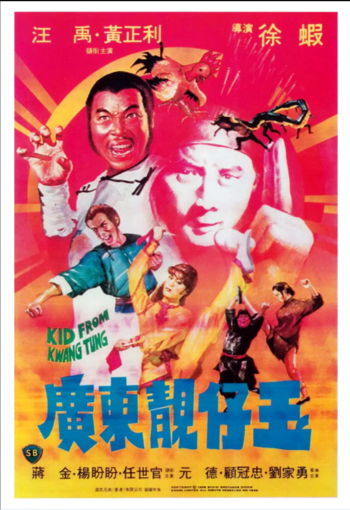 Yes, that's a dude in a chickensuit fighting a bunch of dudes carrying an armored centipede costume at the top of the poster. And It Makes Sense in Context.
Advertisement:

Kid from Kwangtung is a 1982 Shaw Brothers Martial Arts Movie starring Wong Yue, Chiang Kam and Sharon Yeung, notably being Sharon's last martial arts film she made with the Shaws.

He Jia-yu and Wu De-zhi are two hooligans who studied in the same school, and are neighbors, who spend their days getting into trouble with their strict, overbearing fathers. After a lion dance tournament which sees He Jia-yu and Wu De-zhi, respectively donning a chicken suit and an armoured centipede (What, you think we're making this up?

◊) ending with the troublesome duo getting into serious hot water, they eventually made up after bumping into Chen Xiao-wei, the daughter of another kung fu family who secretly serves the Anti-Manchurian resistance. As luck would have it, a dangerous and powerful Manchurian Warlord, Lord Luo Yi-hu, have plans to wipe out all the surrounding martial arts sect and take over, and the trio, after a series of unlikely encounters brings them closer together, are the unlikely heroes standing in the way of the warlord.