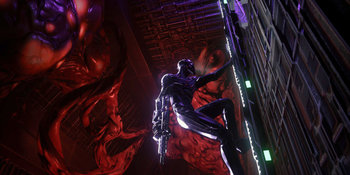 Irid Novo is a success.
"Welcome, Spawn."
"Breathe. The discomfort is only temporary."
Advertisement:

Hellpoint is a Souls-like Action RPG developed by Cradle Games and published by tinyBuild. It is available on Steam and PlayStation 4.

Once a pinnacle of human achievement, the Irid Novo space station has fallen. Its ruins are now overrun by cruel interdimensional entities acting as puppets of the malevolent Cosmic Gods.

You have been created by an entity known as the Author. You are organically printed on Irid Novo and sent on a mission to investigate the unholy series of events that led to the catastrophic incident known as the Merge and gather as much data as you can. The abominations now infesting the station, and the former inhabitants now twisted into their servants, will not make it easy for you.