You may be looking for Solaris, the 2002 film adaptation of the same novel, directed by Steven Soderbergh. 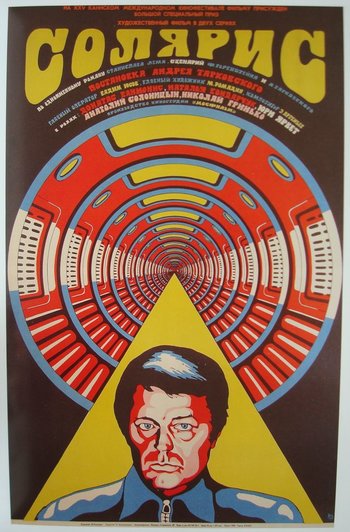 Solaris is a 1972 film from the Soviet Union, directed by Andrei Tarkovsky.

Kris Kelvin, a psychologist, is sent into space. Specifically, he is sent to a space station which orbits around the planet Solaris. Kelvin's mission is to evaluate the conditions on the station and determine whether or not the station should be maintained. He arrives at the space station and finds it badly deteriorated. He expected to find a three-man crew, but one of the three crew members—his old friend, Dr. Gilbarian—has killed himself. The other two members of the crew seem completely uninterested in helping Dr. Kelvin or answering his questions. After getting some sleep, Kelvin wakes up, and gets a terrible shock. Somehow, his wife Hari, who has been dead for many years, materializes on the space station.

Andrei Tarkovsky's adaptation of Stanisław Lem's 1961 science fiction novel Solaris. Rather than make a direct adaptation, Tarkovsky turned Lem's science fiction story into a psychological drama. While the novel dealt primarily with the problem of communicating with a fundamentally different life form, the film is more concerned with such themes as life, death, identity, love and humanity.

This films provides examples of: