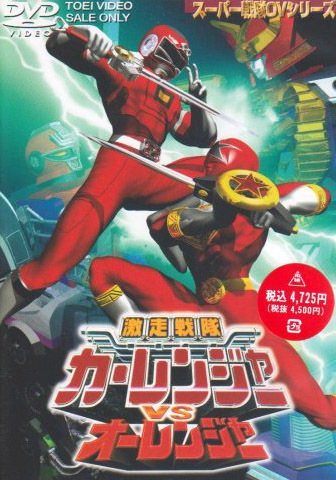 Under orders from Gynamo, SS Sutatanzo is sent with special gas Exhaus provided to put in cars to have them run away to the Baribarian to be chop-shopped into new Bowzock vehicles. However, while the other Carrangers handle the Gorotsuki, Red Racer drives Signalman to ahead of the cars to use his heart-warming song to guilt-trip the cars to return to Earth with Sutatanzo retreating. Later, after being forced to return to garage on foot, Kyousuke arrives to a hot spring where he finds a strange monster who is pursued by UAOH. The monster, Bara Mobile, manages to win Kyousuke over with a sob story of persecution as his teammates arrive. The UAOH team is also gathered and, after questioning each other, both teams transform to battle it out. While the others pilot RV Robo and Ohranger Robo in the fight's climax, Red Racer fights OH Red to protect Bara Mobile. However, the Carranger's transformation attracts the Bowzock who help the OH Red fight Red Racer before it escalates into a highway chase scene. After Red Racer learns that Bara Mobile is really evil, the villain revealing his insane plot to convert humans into Car-Humans, he stops Pegasus Thunder to hand him over to OH Red. Under Exhaus's orders, while holding the regrouped Carrangers off, Gynamo has his men to take Bara Mobile back with them to the Baribarian with OH Red captured as well thanks to Sutatanzo's high octane gas. The other Ohrangers arrive, learning of their leader's capture with intent to report it to Chief Miura so Kyousuke would face the consequences.

Later, Chief Miura arrives to the Pegasus Garage and offers not to press charges if the Carrangers rescue OH Red. But it requires them to undergo harsh special training to pilot Ohranger Robo, with Kyousuke being the most tortured among the group. Though the Carrangers passed, Exhaus expected the rescue attempt and had the Bowzock set up a trap so they be subjected to Bara Mobile's experiment and become Car-Humans along with Gorou. But Red Racer was not among the captured and he manages to save the others as they destroy Bara Mobile's lab. Taking the fight back to Earth, the Carrangers and Ohrangers take out the Wumpers before defeating SS Sutanzo and Bara Mobile with a Booster Cannon/Ohre Bazooka combo. The two monsters then enlarge with VRV Robo and Ohranger Robo formed to fight them. However, the fight becomes more hectic when Norshirion-Extra (Whom Exhaus ordered from the back of one of his evil magazines,) appears before Sirender arrives to even the odds as the Sentai mecha use their signature attacks to destroy the three villains. Soon after, having buried the hatchet, the two Sentai teams celebrate their win on the beach.