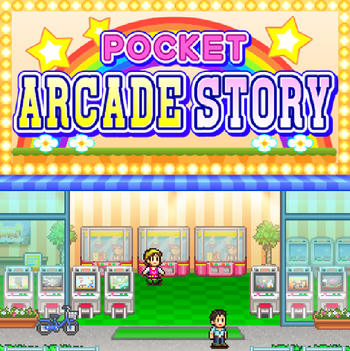 Every geek's wet dream
Pocket Arcade Story (original Japanese title ゲームセンター倶楽部 - lit. Game Center Club) is a simulation game released by Kairosoft, originally released on NTT DoCoMo i-mode phones but have since been ported to Android and iOS, and saw an English release on June 29, 2016. In it, you get to fulfill every geek's dream of running and maintaining an arcade. However, like other Kairosoft games, the mechanics of the game is extremely deep and complex. Aside from trying to build and run a successful 5-star arcade, you have to build friendships between your patrons, holding events, as well as partake in tournaments and high score challenges, all to unlock further arcade machines, vending machines and vendors, as well as deco pieces, to furnish your arcade with. And as with all Kairosoft games, you do this while trying to balance a very thin bank account.
Advertisement:

The tournament portion involves a game that's most certainly not Street Fighter II called Road Fighter II: New Kairo Fighters. There are nine characters, but you don't get to control any of them directly. Instead you can only tell the player-side AI in the game what actions to pull off through the three buttons on the screen. Needless to say, it's harder than it sounds. Winning a tournament for the first time usually nets you cash, but any replay will only result in satisfaction points to put towards high score challenges and mixer events.

Has an Updated Re-release called Pocket Arcade Story DX since 2018. This release changes some aspects of the game and rebalances the game mechanics somewhat (namely, tournaments are now multiple-choice and is accessed via a town map). The non-DX version in the meantime has been ported over to the Nintendo Switch as of April 2020.