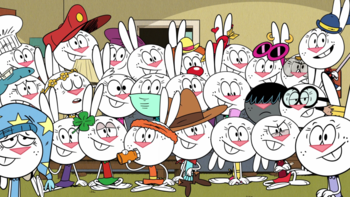 Welcome to the Rabbit House
White Hare: When Lincoln tries to come up with a plan to introducing himself to a new girl at school, his sisters catch him, so he tries to avoid them.

Insta-gran: Pop-Pop introduces his new girlfriend to the family, and she seems great until she starts showing up uninvited.