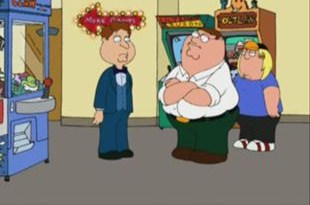 Thanks to Peter being Peter, plans to have Stewie's first birthday party at Cheesy Charlie's are canceled, which upsets Lois—but not as much as having Meg ditch the party to be with her new friends, who are all part of a suicide cult.