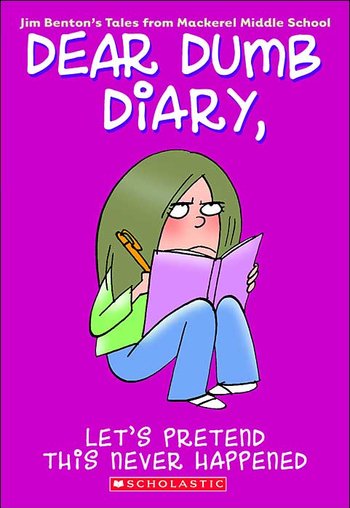 Now, by the power vested in me, I do promise that everything in this diary is true, or at least as true as I think it needs to be.
Signed,
Jamie Kelly
Advertisement:

Dear Dumb Diary is a series of children's books written by Jim Benton (who also created It's Happy Bunny and Franny K. Stein), presented as the diaries of Jamie Kelly, a middle-school girl with a very interesting view of the world.

In summary, the books capture Jamie's thoughts through a mixture of plans, strange events, humour just sailing on Rule of Funny, and frequent deconstructions and parodies of common School Tropes. The main characters — Jamie alongside Isabella and Angeline — spend their seventh grade year getting into wacky situations, whether they revolve around (supposedly) haunted pants, creepy student-teacher crushes, money-raising schemes or teacher's relationships, often at the hands of a plot built by Isabella. Each book usually ends with Jamie learning a valuable lesson (though it may not be the one you'd expect).

As of the tenth book, Jamie has finished her six years of the seventh grade.

In 2013, there was a musical film adaptation of the series made for TV, premiering on Hallmark Channel and subsequently available briefly on streaming services like Netflix. Co-written by Benton, the film's plot adopts elements from various books in the series.