Film / A Patch of Blue 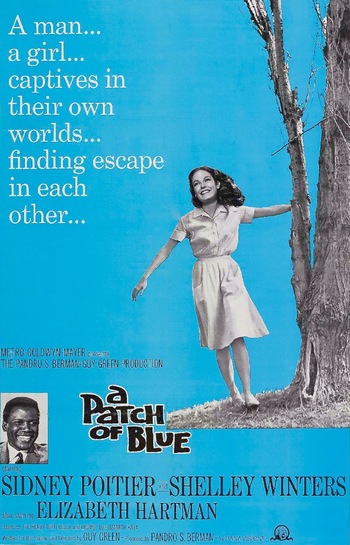 A Patch of Blue is a 1965 American drama film from cinematographer-turned-director Guy Green, starring Sidney Poitier, Elizabeth Hartman, and Shelley Winters. Made during the height of the Civil Rights Movement, the film explores an interracial relationship with "love is blind" as its theme.

The plot is something of a modern-day Cinderella story: Selina D'arcey (Hartman) is a blind teenage girl, living in an unnamed big city with her abusive prostitute mother Rose-Ann (Winters) and alcoholic grandfather Ole Pa (Wallace Ford). She has little pleasure in life, spending her days cleaning the apartment, washing clothes, and stringing beads to sell. One day Selina is taken to the park, were she meets Gordon Ralfe (Poitier), an upper crust black man, who befriends and takes pity on her. Gordon plans to help Selina out of her impoverished life and the two begin to develop feelings for one another.

Adapted by Green from the 1961 novel Be Ready with Bells and Drums by Australian author Elizabeth Kata, the film was nominated for five Academy Awards, with Shelley Winters winning for Best Supporting Actress.