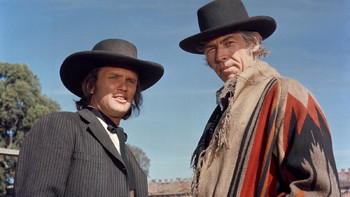 Pat Garrett and Billy the Kid is a 1973 film directed by Sam Peckinpah, starring James Coburn and Kris Kristofferson.

New Mexico Territory, 1881: Pat Garrett (Coburn) rides into the town of Fort Sumter to find his old friend, legendary outlaw Billy the Kid (Kristofferson). After a friendly greeting where they reminisce about old times for a little bit, Garrett delivers some news: he has been appointed county sheriff, he has been ordered to chase Billy out of Lincoln County if Billy doesn't leave in the next six days, and he intends to do it.

Billy doesn't leave, so six days later Garrett and his posse surround Billy's hideout and take him prisoner. Billy, however, escapes from the Lincoln County Jail, killing two deputies in the process. Garrett, offered a bounty of $1000, then goes hunting after Billy.

A famous Troubled Production. Peckinpah re-wrote the script, and argued with Metro-Goldwyn-Mayer throughout about cost overruns. Peckinpah's alcoholism was also a big problem on the set. MGM took the film from Peckinpah in post-production and cut 18 minutes off the 124-minute run time. A Director's Cut of 122 minutes was finally issued in 1988. A slightly shorter version of 115 minutes was reedited for the DVD release in 2005.