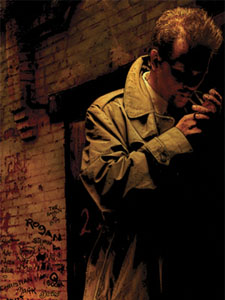 I'm not the nicest bloke you've ever met, but I do me best.
"So. Magic. What's it all about, then? I wonder what you were after when you got into the game. It's usually something. Something specific that you think is worth taking risks for. Money. Sex. Revenge. Power. Enlightenment. Thinner thighs in thirty days. It's a long time ago for most of you, I know. Maybe you don't remember. Fuck, maybe you don't even want to. But I'll tell you something for free. At rock bottom, it's always about the same thing. It's always about entropy. The Universe is winding down. Things fall apart. The moving finger writes, and what it writes is 'Tough shit.'"
Advertisement:

A long-running Vertigo Comics horror title that spun off from Swamp Thing in 1988, running for 25 years before concluding in 2013 with an impressive 300 issues. Hellblazer followed Con Man, Occult Detective, gambler and magician of ill repute, John Constantine (rhymes with "turpentine"), as he tangled with Hell, Heaven, the police and the criminal underworld. The comic typically combined horror and fantasy elements (demons, ghosts, vampires. etc.) with a gritty 'real world' setting and an occasional dash of political and social commentary. The majority of the series was set in modern urban Britain, particularly London. Virtually every British comic writer of repute has written for Constantine, such as Jamie Delano, Garth Ennis, Warren Ellis, Neil Gaiman, Brian Azzarello, Denise Mina, Paul Jenkins, Andy Diggle, Ian Rankin and Peter Milligan among others.

Hellblazer was notable for averting Comic-Book Time, with John steadily growing older along with the rest of us. An ancestor of his, Johanna Constantine, appeared in some issues of The Sandman (1989) and was fairly badass.

For the tropes specific to John himself, regardless of his incarnation, see the Hellblazer – John Constantine page.