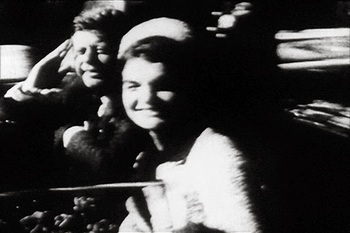 "It appears as though something has happened in the motorcade route..."
Advertisement:

Report (the title is sometimes written in all caps as REPORT) is a 1967 short film (13 minutes) directed by Bruce Conner.

It is an impressionistic documentary of the assassination of John F. Kennedy. The film, which consists in its entirety of found footage clips, can be divided into two parts. The first part deals with the assassination. A clip of the presidential limousine, with JFK and First Lady Jacqueline Kennedy waving at the camera, is shown repeatedly. (The Zapruder Film is not shown in Report, as it was not shown to the public until 1975.) Other clips, like shots of the Texas School Book Depository and a famous clip of Oswald's rifle being carried through a crowd at the police station, play along with an audio soundtrack consisting of radio news bulletins and eyewitness testimony. This portion ends with alternating clips of clear and black film leader

that flicker rapidly, and may or may not be meant to represent the fading consciousness of a dying man.

The second part of the film goes further afield. Clips jump back and forth from before the assassination (going all the way back to Kennedy's inaugural parade) to after the assassination in clips showing Kennedy's funeral as well as the murder of Lee Harvey Oswald. Complementing these are other film clips that reinforce the themes. We see a bullfighter and bull in the ring, clips of a nuclear bomb blast, a television commercial for a refrigerator, and an obviously symbolic shot of a rifle bullet shattering a light bulb.

Compare A Movie, another impressionistic Bruce Conner film made entirely out of found footage.