Literature / The Slow Regard of Silent Things 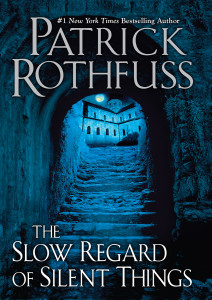 "Deep below the University, there is a dark place. Few people know of it: a broken web of ancient passageways and abandoned rooms. A young woman lives there, tucked among the sprawling tunnels of the Underthing, snug in the heart of this forgotten place.
Her name is Auri, and she is full of mysteries."
Advertisement:

A companion novella to The Kingkiller Chronicle by Patrick Rothfuss, The Slow Regard of Silent Things follows a week in the life of the mysterious Auri, who lives in a network of abandoned rooms underneath The University and is eagerly awaiting a very special visitor.

The slow regard of silent tropes: