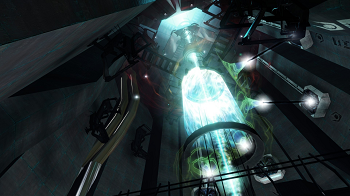 MINERVA: Metastasis is a Game Mod for Half-Life 2: Episode One, created by Promoted Fanboy Adam Foster. Its intriguing level design, taking cues from the Silent Cartographer map from Halo: Combat Evolved, along with mysterious backstory and overall quality caught the attention of Valve, who decided to hire him.
Advertisement:

MINERVA takes place within the Half-Life universe. You play as...well, it's not really very clear. Hints and clues picked up throughout seem to have the Player Character as a former Combine Overwatch soldier outfitted with a Black Mesa HEV suit. You're infiltrating a small island base the Combine have taken over, and the mysterious secrets held within. You're doing this apparently at the behest of the enigmatic title character, who is never seen. Instead, she/it plays the role of a Voice with an Internet Connection, intermittently sending you messages throughout the mission. As to her/its identity, that's equally mysterious, although she/it seems to have something of a mythological bent.

Also of note is that this isn't Foster's first mapping experiment. Someplace Else, a mod for Half-Life, appears to be set in the same universe and seems to be a prequel of sorts.

The second episode, MINERVA: Out of Time is missing in action, and the author, now working at Valve, doesn't appear to have plans to finish it any time soon.

The mod's Web site is here

. It's also on Steam