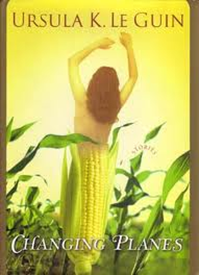 I never saw such a variety of people as were in that car - all shapes, sizes, colors, degrees of hairiness, featheriness (the street sweeper's tail had indeed been a tail), and, I thought, looking at one long, greenish youth, even leafiness.
Advertisement:

A cycle of stories by Ursula K. Le Guin, each taking place on another plane - the word "plane" being used not unlike in the universe of Planescape or Magic: The Gathering, the main difference being that in Le Guin's book one can get to another plane only from the waiting lounge at the airport, provided that one is sufficiently stressed and tired. Differences between particular planes are primarily cultural, even if they are of biological or technological origin. People from Earth practice interplanary travel either out of boredom at the airport or as tourists who want to spend their holidays on a particular plane. When the stories focus on them instead of the natives of the other planes, it is done for Aesopian purposes. The stories are not very action-laden, as they resemble anthropological descriptions of foreign cultures and are based on the exploration of large but simple differences between the inhabitants of Earth and other planes.