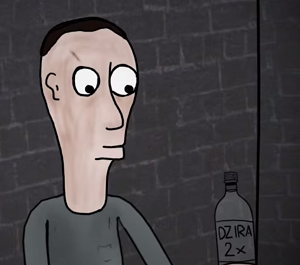 The brew tastes like death. Peter drinks it because it makes him feel manly.
Woke up naked on the roof. Forgot to buy bread.
—Peter on vodka

. Each episode follows the humorously surreal life of a man named Peter and a small set of recurring characters. Peter narrates the less-than-sixty-second shorts in Latvian, though English subtitles are provided for earlier episodes (and more are on the way).

See every moment so far

is the Latvian-only official site.