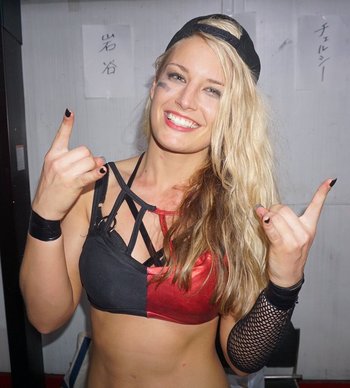 Her story with the WWE began during the 2014 Australian tryouts of the company while it was touring on the country. She also took part in the 2015 WWE UK Tour. On June 2017 she was announced as one of the competitors for the inaugural edition of the Mae Young Classic tournament, where she eliminated Ayesha Raymond, Lacey Evans and Piper Niven before losing in the semifinals against eventual winner Kairi Sane. A year later, she was announced as a new signee for the company and became the #1 contender for the NXT Women's Championship defeating both Killer Kelly and Isla Dawn. In that same year, she became the winner of the second MYC tournament (defeating Io Shirai at the highly-lauded WWE Evolution PPV) and in 2019 she became the second NXT UK Champion after defeating Rhea Ripley at NXT UK TakeOver: Blackpool. Sadly, after her reign in NXT UK ended, she fell off the planet in terms of use on the main roster, and then after a brief period of intense misuse she asked for and was granted her release from WWE on December 29, 2021.

On the March 30, 2022 episode of Dynamite, Storm made her debut for All Elite Wrestling.

"Cross my heart. Trope to die. Stick a needle in my eye."