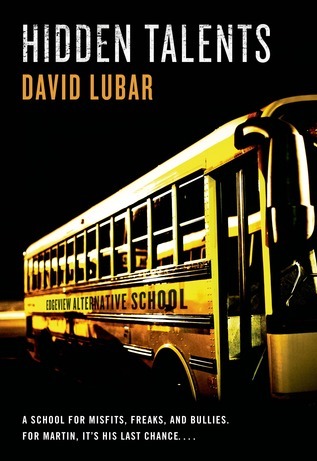 This place may be hell, but at least it's our hell.
—Martin, Hidden Talents
Advertisement:

Hidden Talents and its Darker and Edgier sequel, True Talents, are novels written by David Lubar.

The first book follows the adventures of Martin, a smart-aleck sent to Edgeview Alternative School, a correctional facility. Here he meets the aptly nicknamed Torchie, a supposed pyromaniac; Cheater, an Asian and Nerdy boy sent to the school on accounts of cheating on tests; Flinch, a future comedian with hair-trigger reflexes that make him a disruptive influence in school; the introverted Lucky who was sent to Edgeview for kleptomania; and Trash, a loner artist and past vandal. They become close friends as they evade ruthless bully Bloodbath and attempt to stay out of trouble, with varying results on both fronts.

However, as Martin gets to know better this Ragtag Bunch of Misfits, he starts to notice that something's unusual about his friends: all five appear to have psychic abilities. Although they initially disbelieve him, even to the point of ostracizing him when he persists in his theory that they are not delinquents as the rest of the world presumes, Martin manages to make them accept their gifts.

After one escape from the school for an evening of gaming at the nearby arcade ends up with a fight against the mayor's son and his cronies, a broken arm for Flinch when Bloodbath cuts the escape ladder going up to Lucky's room, and a moved examination of Edgeview that could close the school thanks to the mayor's intervention, Martin and his friends mobilize to keep Bloodbath from sabotaging the examination, using their own hidden talents to keep the school alive - and discover a few true talents along the way.

Tropes present in Hidden Talents include: