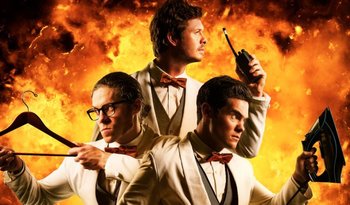 Some are born heroes. Others are maids.
Advertisement:

Written by Holm and directed by Kyle Newacheck, it's like Die Hard, as a stoner comedy. The story centers on three loser friends (Alexxx, Joel, and Darren) working as hotel maids who want to get their business idea off the ground. Just when they are on the verge of getting their video game financed, their benefactor is captured by terrorists who take the hotel hostage for ransom. They must fight the terrorists, save the hostages, and get their business off the ground. Hilarity Ensues.

This film stars the main actors from Workaholics, and whilst this isn't explicitly a Workaholics film, it shares a lot of the same cast and crew.