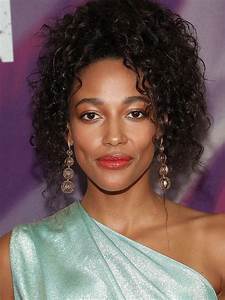 Kylie Bunbury (born January 30, 1989) is a Canadian-American actress and former model. From Hamilton, Ontario, Canada, she was born to a Guyanese-Canadian and European-American. She spent her childhood in Europe and the US. Bunbury has two younger brothers, Teal and Logan. Teal is also an actor.
Advertisement:

Her first role was on Days of Our Lives after she quit modeling. Bunbury had major roles on Twisted and then Under the Dome. Her breakout role was as the main character on Pitch. She was also in the main cast for Brave New World. Bunbury currently is a protagonist on Big Sky.

Bunbury has been married to businessman Jon-Ryan Alan Riggins since 2020. She announced her pregnancy in July 2021, giving birth to their son December 6th of the same year.