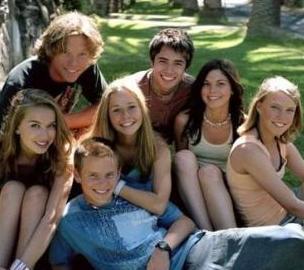 Blue Water High is an Australian show targeted to teens that ran for three seasons from 2005 - 2008. Each seasons followed a different group of Australian surfers who had been chosen to take place in a year long training course at the Solar Blue Academy, at the end of the year there would be a final surf off and the best male and female would win a ticket on to the pro circuit. Season one brought us Rebecca "Bec" Sanderson, Dean "Edge" Edgely, Perri Lawe, Matthew "Matt" Leyland, Fiona "Fly" Watson, Heath Carroll and Anna Petersen. Craig "Simmo" Simmonds was head coach while Deborah "Deb" Callum took care of the management and Jilly ran the household and looked after the surfers. Season one quickly became a big hit with various related competitions were held and even live interviews which fans could watch online.

Season two had Deb moved back to management buildings while Fly decided to be a coach at the academy. The new surfers were Eric Tanner, Amy Reed, Mike Kruze, Brooke Solomon, Corey Petrie and Rachel Samuels. The second season wasn't as well received as the first, with the main problem being overly dramatic. It was still popular.

Season three came after almost two year of waiting and brought with it lot of changes. Solar blue had been purchased by a company that didn't really want to keep funding it, giving an in-universe version of Executive Meddling. Simmo had been fired, Jilly had left and Bec had been given the job of head coach. Garry Miller was soon chosen as trainer. The students this year were Guy Spender, Charley Prince, Adam Bridge, Bridget Sanchez, Loren Power and Cassie Cometti.

Blue Water High is notable for being one of only two Australian teen shows to receive three seasons for the decade 2000-2009, the other being H₂O: Just Add Water.