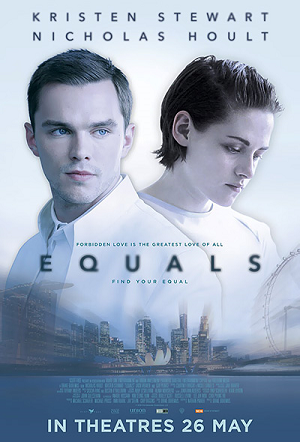 "Will you risk everything to feel something?"
— The trailer for the film
Advertisement:

A 2016 Science Fiction Dystopia Romance film starring Nicholas Hoult as Silas, a digital artist, and Kristen Stewart as Nia, a historian colleague of Silas's who corrects Silas on the accuracy of the illustrations he produces. Follows in the footsteps of many similar Science Fiction Dystopian works, in which the story is set in a post-apocalyptic future where the remaining humans live in the technologically-advanced 'Collective', have undergone fetal genetic reprogramming to turn off emotions, and emotions as a whole are considered a dangerous, socially destabilizing illness known as S.O.S., or 'Switched On Syndrome'.

Of course, the two protagonists end up falling in love.