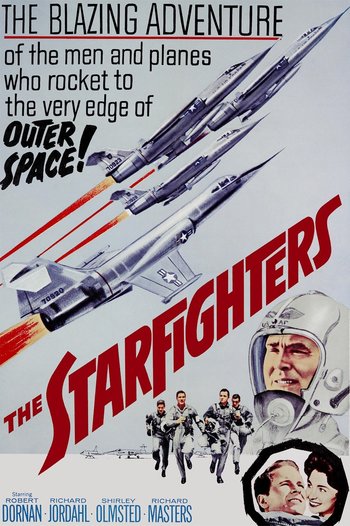 Ostensibly, a story about a young pilot who seeks love and struggles for his stern father's approval while learning to fly the Air Force's most advanced fighter jet. In reality, an hour-and-a-half Infomercial for said jet, the Lockheed F-104 "Starfighter."

Air Force pilot John Witkowski Jr. transfers to George Air Force Base to begin training in the shiny new F-104, quickly becoming an ace, but his Congressman father disapproves and attempts to pull strings to get his son transferred out of the Starfighter squadron. John refuses. Meanwhile John goes on blind dates with his married friends who've set him up with a nice farmgirl from Iowa, and he quickly gets shot down. In the climax of the film, a storm disrupts a training exercise, crashing one plane and forcing Witkowski to land at another air base, but it's okay; everyone is recovered safe and sound. At the end, the Starfighter squadron is deployed to Europe; John goes with them, leaving behind his fledgling Love Interest and against the wishes of his father.

Of course, the real star of the film is the F-104 Starfighter. We get lots of Stock Footage of the Starfighter in action and lots of shots of it inactive as well. Meanwhile the film's lead actor, Robert Dornan, went on to become a U.S. Congressman.

The film never had a wide release, and was shown mostly in drive-ins, a.k.a. filler for teens to make out in cars. Think of it as being a bit like Top Gun if it had been set at an airbase rather than on a carrier and made by utterly incompetent people.

For the Mystery Science Theater 3000 version, please go to the episode recap page. Not to be confused with The Last Starfighter.

The Starfighters provides examples of: