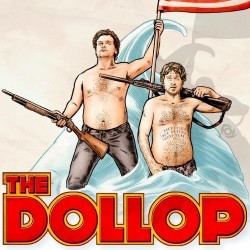 No sleep till Hippo.
The Dollop

is a weekly American history podcast hosted by comedians Dave Anthony and Gareth Reynolds. The standard format is: Dave pre-prepares a story on a particular historical event or figure and reads it aloud to Gareth, who has no prior knowledge at all of what the story is going to be about. The two then proceed to riff on the story as it unfolds.
Advertisement:

The show tends to focus on weird stories from American history: bizarre events, eccentric inventors, crazy athletes, and general strangeness. Sometimes a central figure or event to the story is well-known or even recent enough to be remembered by the hosts, but further research shows there's a much stranger and funnier side to it than most people know.

While most episodes are recorded in Dave's or Gareth's home, the pair often perform the show live; they've even toured Australia three times, during which Dave tells stories from Australian history (which can often be just as bizarre as American history). Likewise, a live show in Iceland focused on the history of Iceland and a show recorded in Vancouver featured a story from Canadian history.

Live shows often feature guests riffing along with Dave and Gareth, most often the Australian comic Wil Anderson (who is responsible for the show's popularity in his home country), as well as Patton Oswalt, Brian Posehn, and the hosts of Chapo Trap House. Occasionally, the tables are turned and Gareth reads a story to Dave in what is known as a "Reverse Dollop"; with these, Gareth gives himself the freedom to recount a story from whatever country he wants, including Britain and South Korea.

A book based on the podcast, The United States of Absurdity: Untold Stories from American History, was released on May 9, 2017 with a foreword by Patton Oswalt and illustrations by the show's resident artist James Fosdike. The book is co-written by Dave and Gareth and features condensed versions of stories from previous episodes of the show.

The show has been spun off multiple times in recent years; in 2019, Dave and Gareth recorded The Dollop England & UK, a in-studio limited season devoted entirely to UK history, as a way to promote their live summer tour. On February 29, 2020, a Mexican version — El Dollop — starring Leyendas Legendarias hosts José Antonio Badía and Eduardo Espinosa was announced, thus finally fulfilling the promise of being a "bilingual" podcast.

The Dollop provides examples of: