Podcast / It Could Happen Here 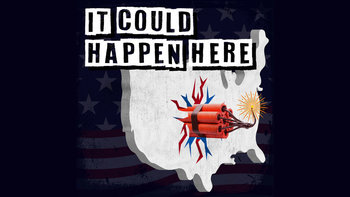 It Could Happen Here is a 2019 podcast created by Robert Evans of Cracked fame. Evans' podcast looks at potential disasters and events and examines what their fallout could be, laying out what happens as each domino falls. The first season examines the political divide in the United States that was intensified by the 2016 elections, and does a What If? on the idea if the divisions were to spiral into a full-out civil war.

Citing actual civil wars that are currently going on, along with other trends seen, the podcast details how such a war would realistically look like in the US, and what factions would be active during such an event.

Listen to the podcast here.

See also Evans' other work Behind the Bastards, a much more light-hearted work concerning the kind of person who could end up starting such a scenario in real life. He has also writen a novel based on many of the ideas presented in this podcast called After the Revolution. In August 2021, Evans announced that he was making a continuation of the podcast, called It Could Happen Here Daily, which discusses other factors in society that could contribute to collapse beyond a civil war.

The first season of this podcast contains examples of:

The second season of this podcast contains examples of: