Western Animation / Fifi and the Flowertots 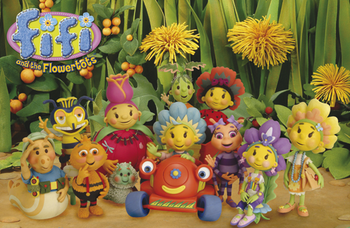 The cast of the series.
Fifi and the Flowertots is a British stop-motion preschool television series created by Keith Chapman; it tells the story of a forget-me-not

named Fifi and her "flowertot" friends, and their adventures in the garden. The show started in 2005 and ended in 2010. When the show first aired in America on Sprout, it quickly became one of their favorite shows... for a while. Their promotion for the show eventually waned, and only the first two seasons were aired.