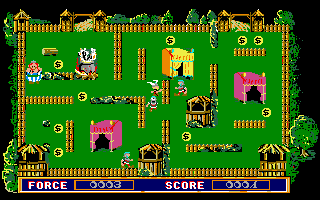 Asterix and the Magic Carpet AKA Asterix in Morgenland is a top-down, third-person perspective action-adventure video game released by Coktel Vision in 1987.

The game is based on famous comics, animations and movies series about brave independent Gauls, who drink magic power potions and fight with Romans.

This time Asterix and Obelix fly on the magic carpet to India with Cacofonix, whose song can make the rain for the friendly Indian villagers. But during the travel he lost his voice. Now Asterix and Obelix have to find the cure for Cacofonix's voice and rescue Princess Orinjade, who will be sacrificed by evil Hoodunnit if it isn't raining.

During the game you watch the static cartoon scenes and choose the answers to progress in your travel. Sometimes you need an action, so it is action sequences in the game, for example, to defend the village from the robbers, etc.