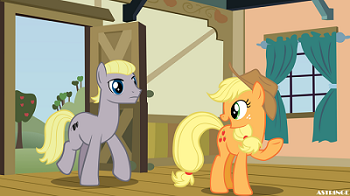 From a megalomaniac evildoer to magical equine, Wesker's been through it all.

Wesker's day has taken a turn for the worse. No, it wasn't his plan to "purify" humankind of its weak members falling apart, nor was it Chris and Sheva sending him to a fiery, lava-filled doom. No, his day becomes absolutely dreadful when he somehow survives all of those events and wakes up in a colorful, perfect world filled with magical talking ponies.

Now out of his element and stuck as a pastel Earth pony, Wesker must adapt to his new sugary existence in the town of Ponyville. However, this idyllic existence may not last for long, as an ancient threat returns... and Wesker again seeks to harness it.

A crossover Fan Fic between My Little Pony: Friendship Is Magic and the Resident Evil franchise by Iamdanny0

. This story treads new ground by sending the villain, an omnicidal megalomaniac, into a world entirely unprepared for somepony of his methodology. Equal parts hilarious and intriguing, this fanfic is worth a read, even by non-RE fans.

, with 51 chapters. Currently on a hiatus.

This Fan Fic provides examples of the following tropes: