Video Game / Princess Remedy In A Heap Of Trouble 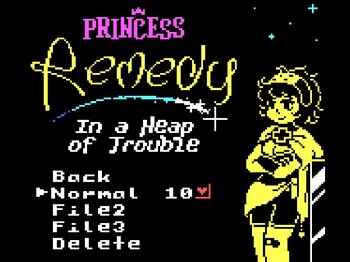 The player controls the titular Princess Remedy, a student at the Saturnian healing school who has been called back from her vacation to aid the suddenly ill residents of Saturn. Some time before, a boss tower sprouted from the ground, lifting entire towns with it. While the residents eventually got used to it, it seems to be the root of the widespread disease. Remedy must travel from area to area to heal the people of Boss Tower and find the origin of the illness.

New to this game is the ability to date any healthy NPC to receive a special power that replaces Remedy's default flask.