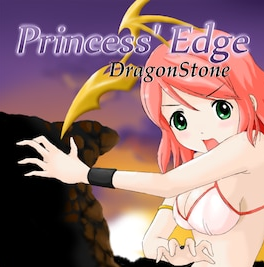 Princess' Edge - Dragonstone is a Beat 'em Up / Hack and Slash videogame created in 2013 as the debut of indie developer erobotan. Inspired by the classic games such as Golden Axe and Video Game/Guardian Heroes, it's considered an homage to games of the 90's.
Advertisement:

In the land of Arelia, the Ancient Black Dragon once ruled and oppressed all of the inhabitants of the world, eliminating everyone who dared to oppose it, until a brave barbarian princess fought the evil dragon's army and sacrificed herself to seal the great evil and liberate the dying land. But the evil minions located the seal of the dragon and broke it- now it's a matter of time before the land of Arelia is consumed again by the might of the evil dragon and its minions.

However, not everything is lost, because the Princess was liberated from the seal at the same time as the Black Dragon. So once again, she settles on a quest to defeat the evil dragon once and for all and, armed with her sword and magic, she's the only hope that Arelia has.

The gameplay resembles a standard Beat'em up, with plenty of both physical and magical moves, but incorporating the multi-plane system first used on Treasure's Guardian Heroes, in addition to a backstab system that deals more damage to the enemies and the ability to ride a mount just like SEGA's Golden Axe.