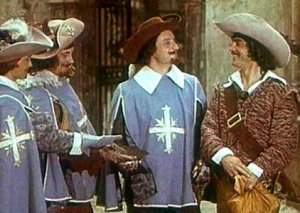 A 1978 Soviet miniseries, one of many, many adaptations of the Alexandre Dumas novel The Three Musketeers. This particular version, however, is the most well-known and definitely the most iconic in the former Soviet Union. Executed as a low-budget semi-musical, with most of its songs becoming national classics, it consists of three episodes making 220 minutes in length in total — a common practice in the country at that time.
Advertisement:

The four lead actors — Mikhail Boyarsky as d'Artagnan, Veniamin Smekhov as Athos, Valentin Smirnitsky as Porthos and Igor Starygin as Aramis — became famous overnight in the Union after the movie's release, and "playing musketeers" quickly became one of the favorite pastimes of Soviet kids. They remained good friends after the filming, and were so enthusiastic about the project that they often assumed their character identities even off stage — for example, when heading out to local bars in Odessa, having no time to take off their musketeer costumes because of the tight filming schedule.

The four later reprised their roles in three sequels, filmed in Russia after the end of the Soviet Union: two based on Dumas' sequels to the novel (Musketeers Twenty Years After, 1992, and The Secret of Queen Anne or Musketeers Thirty Years After, 1993), and a fourth one in 2009, of which the less is said, the better.