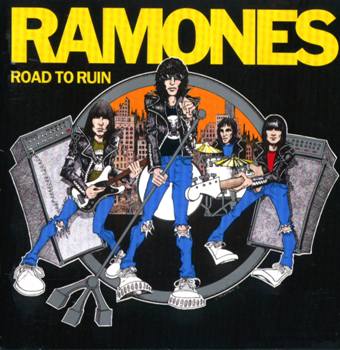 Don't be sedated while you listen to this.
Advertisement:

Road to Ruin is the fourth studio album by The Ramones, released in 1978. It is their first album with Marky Ramone, who replaced founding member Tommy Ramone shortly after Rocket to Russia. Tommy does co-produce this album, however.

The album is notable for featuring stuff not found on punk records in those days, such as guitar solos, acoustic rhythm guitars and ballads. The most famous song is "I Wanna Be Sedated", which is one of their signature songs.