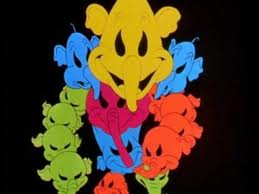 "I am not the type to faint, when things are odd or things are quaint,
but seeing things you know that ain't can certainly give you an awful fright!
What a sight!"