For characters that appear in the games, see the Disgaea, Disgaea 2, Disgaea 3, Disgaea 4 and Makai Kingdom character sheets. 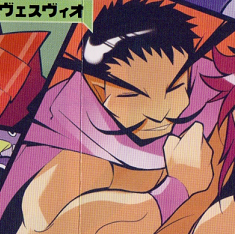 Younger brother of Krichevskoy, and Laharl's uncle. Despite his muscular physique, he talks like a woman and doesn't have the guts to stand up to his own wife. He wears a radiantly colored pink mantle that if you see it once, you'll never forget it. Was once in love with Sakura, but he was turned down.

Yasurl takes the fun out of funbags.
Vesuvius’s wife, and Laharl's aunt. Back in the day, after Laharl’s mother died, she "took care" of him for a 100 years, and she abused him with her whip. Since then Laharl has hated women with sexy bodies. She is not fond of Laharl being the Overlord because he has human blood running through his veins. 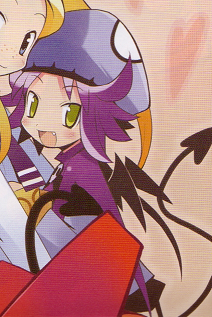 Vesuvius and Yasurl's daughter and the younger twin sister of Kira. A rather young demon. Used to share her body with Kira, but he tried to take over her body, so she rejected him. She now “plays” with Laharl a lot, setting up traps to destroy him. She's a tad-bit crazy and is one of Laharl's problems. 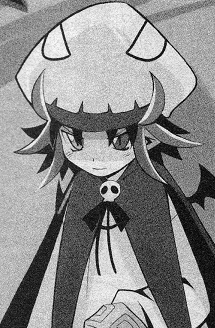 Vesuvius and Yasurl’s son and the older twin brother of Shas. He's actually a ghost and can take control of Shas's body. Has a sick mind and tried to trick Flonne and Etna; and took hostage of Shas’s body to try to defeat Laharl. In the end, he was purified by Flonne and was sentenced to be a prinny for 100,000 years for assassination attempt to the Overlord. He is currently spending time in Celestia to repent. 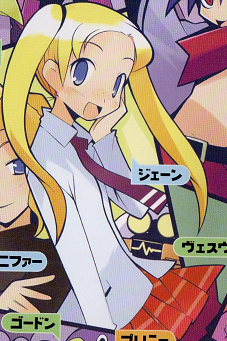 Daughter of Captain Gordon, Defender of Earth! and Jennifer. She can identify the difference between Shas and Kira (who is a ghost). She has been fond of Laharl ever since he saved her from Kira. 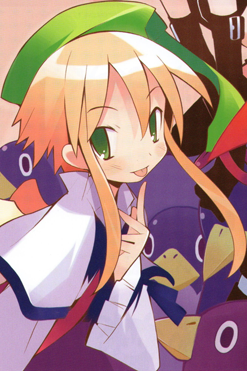 Flonne's younger sister. Rare kind of angel: she likes money more than love and is the exact opposite of Flonne. She ran away from home. She is fond of Laharl since he's the Overlord, and she is always arguing with Flonne. She came to the Netherworld as an exchange student, but went back to Celestia to become a woman worthy of Laharl. 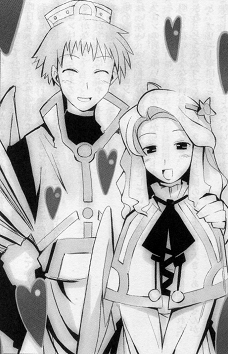 Flonne and Ozonne's parents. Father Terre is always refreshed, and mother Elle is always smiling. Even bigger "Warriors of Love" than Flonne. "LOVE" is their family motto. They made an oath with Laharl to make sure he stays friendly with Flonne forever.

Tropes associated with Terre and Elle: 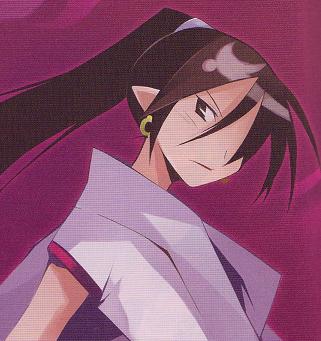 A woman looking for rare and legendary swords. She's female, but she likes flat-chested girls. She wears a traditional Japanese Kimono. She carries a Masamune she created out of Caliburn, and she's a Master Swords-woman. She can't use magic but she can use a couple-hundred swords at the same time. She is on a journey to find both Caliburn and Excalibur, because she burns with passion as a 'Sword Maniac'. Her power is equal to that of Laharl, and her life is divided between several other archangels. She has once beaten Laharl. She was once an archangel working under Lamington, but since angels change between male and female depending on the situation, after becoming a Sword Master her male-side dominated her heart. But after she lost to Laharl, her female-side took over, she fell in love with Laharl and now she stays at the Overlord's castle. 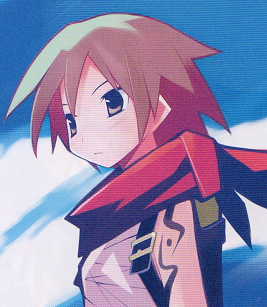 Wife of the King who ruled the human world about a thousand years ago. Laharl met her when he and Flonne travelled back in time. He became very fond of her since he was aware that she's in fact his mother. After Sakura came to steal the King's Excalibur, she and Gwen went to the future world of the Netherworld. She became Sakura's servant, but she escaped and met Krichevskoy, married, and had Laharl.