Disgaea 2: Cursed Memories is a sequel to the first game taking place on a new world with mostly new characters. The protagonist's group is tracking down the legendary Overlord Zenon to defeat him and put an end to his curse, which is turning humans into demons.

Adell is the main character of the game and apparently the last remaining unaltered human on Veldime. He has a strong sense of honor and duty, but he tends to favor rushing headfirst into situations and just beating up the problem. Despite this, he's actually fairly intelligent, but would rather solve things quickly. Furthermore, after awhile characters begin to note that he simply likes fighting for its own sake, which he denies by claiming that he's doing everything to fulfill his oaths and protect his family.

Adell is actually adopted: When he was two, his parents had to leave on a mysterious errand and left him in the care of their closest friends assuring them they would be back when their business was complete. They did not return, which is what inspired Adell to always fulfill his promises. Further, after an experience with a succubus when he was younger (minds out of the gutter!), he dislikes both girls and demons. 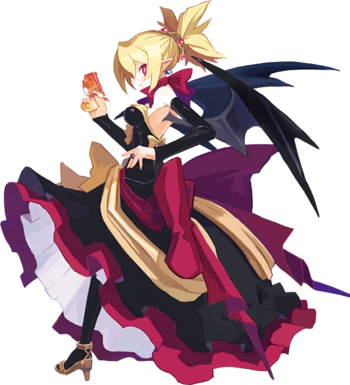 Rozalin is the daughter of Overlord Zenon, though her very existence was a tightly guarded secret from the world. At the beginning of the game, Adell's mother attempts to summon Overlord Zenon, but only succeeds in getting Rozalin to appear, much to everyone's confusion. Bound by the summoning ritual, Rozalin cannot leave on her own and must help lead them to her father. Due to being kept in isolation, she is quite sheltered from the world and more than a little spoiled. Despite this, she turns out to be surprisingly nice and quickly becomes close to both Taro and Hanako. Still, she's quite arrogant and prickly, leading to much banter with Adell. 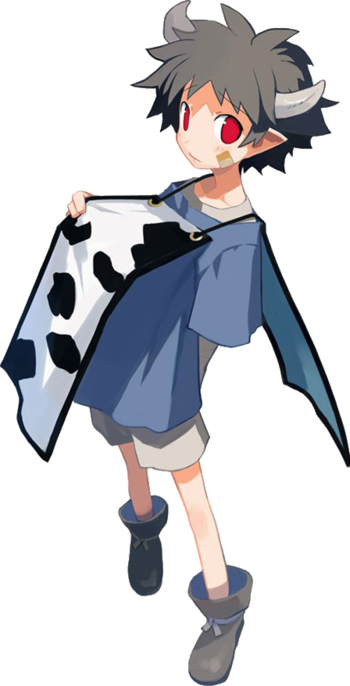 Taro is Adell's little brother. He has cow-like horns, dresses in white with black spots, and has special abilities with milk. He's something of a momma's boy and rather timid, but he grows infatuated with Rozalin and requests to be her servant.

Hanako is Adell and Taro's younger sister. Like Taro, she was born after the curse began and doesn't care about becoming human again, but since she wants to help Adell and finds adventuring fun, she wants to tag along with him. She likes to bully Taro and begins hero worshiping Etna, wishing to grow up to be a Demon Lord 'as cool as Etna and twice as sexier!' 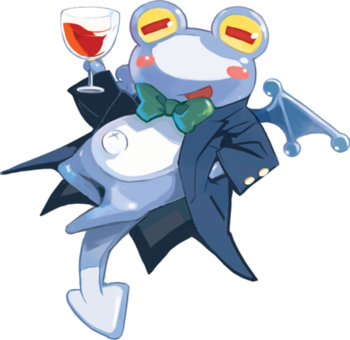 Around the time Rozalin was summoned from her palace, another of Zenon's palaces was attacked by a mysterious stranger who destroyed the building and turned Rozalin's only friend, Tink, into a bizarre floating frog. He has two personalities, one blue and one red. The blue personality is polite, though selfish and cowardly. The red one is rude as well as selfish and cowardly and enjoys hitting on women. Both of them are the resident Butt-Monkey charged by the Netherworld court with the crime of his mere existence. 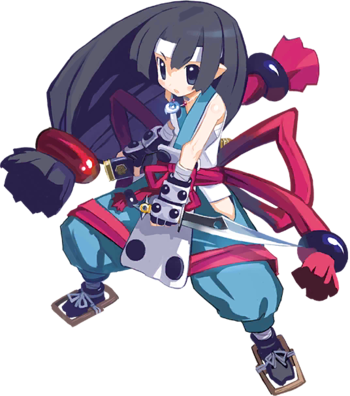 During the tournament before the halfway point in the game, Adell's group runs across a short ninja who is also seeking to defeat Zenon and enters the tournament to get a chance to confront him. After winning by forfeit throughout the matches, she fights against Adell in the semifinals and loses. Following this, Adell reluctantly talks her out of committing seppuku and inviting her to the group so they can confront Zenon together.

Yukimaru was one of three survivors of the Snow Clan, a group of ninjas that were decimated by Zenon fifteen years ago. After their master finished teaching her and her brother, he passed away after leaving them with the mission to defeat Zenon. She is a demon like Rozalin and Tink, but has a view of honor similar to Adell's. 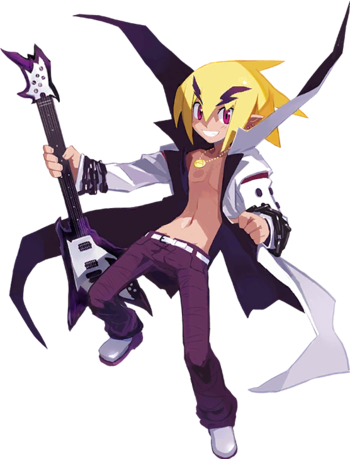 Once, Axel was known as the Dark Hero. He was rich, famous, and popular. Now, he is a disgrace only remembered to be laughed at due to tarnishing the evil image of his sponsors. He is on a quest to regain his title and fame, but is never taken seriously. After his first fight with Adell, his producers claim he was murdered and start embezzling money from his show while hiding any evidence that he is alive, much to his annoyance. After a few defeats by Adell, he begins to view him as his rival, at which point the more serious second half of the story begins.

Despite his Dark Hero title, Axel is actually a surprisingly decent guy. Though the Dark Hero has no scruples, Axel views it as a character he plays and is not really willing to do anything too evil. Which is what got him in trouble in the first place. 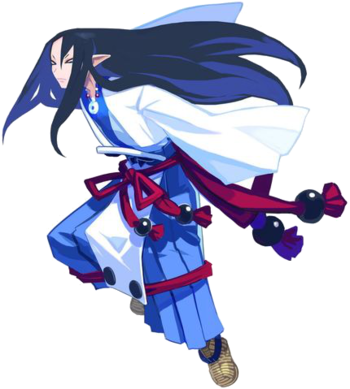 Yukimaru's elder brother. Figuratively and literally blind in his attempts to avenge his clan on Zenon, and perfectly willing to murder Rozalin to draw him out. 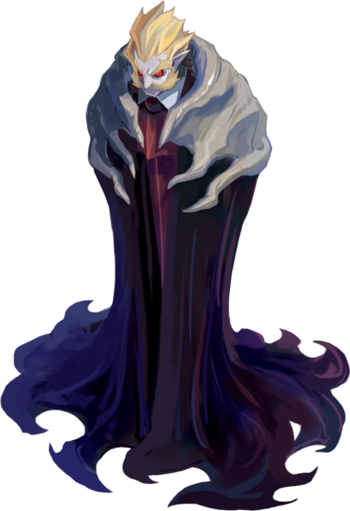 Overlord Zenon is a legendary demon known as "The God Of All Overlords" after massacring 99 Overlords at once and a thousand in total, after which he vanished. In the present, Zenon is corrupting the world of Veldime for unknown reasons while laying low, inspiring Adell to attempt to defeat him and remove his curse.

Though Adell views him as an ultimate enemy, Rozalin believes utterly in her father and cites her pampered upbringing as proof of his love for her... though he's never bothered to actually meet her. 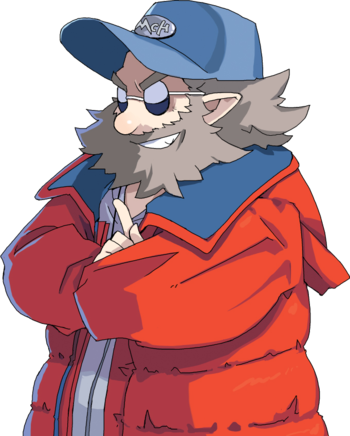 Axel's companion in his quest for fame and glory, the Director is a huge fan of his and wants to see him back in the spotlight, while retaining the spirit of the Dark Hero.
Pink
A member of the Evil Rangers met in the PSP remake's "Axel Mode", she joins Axel after he beats up the Evil Rangers. She's aware he's a total idiot, but it's why she loves him.
Actress
A rising film star Axel meets on the set of a movie he's in, she relinquishes her role to him because she's a fangirl and has always wanted to be in a movie with him. She's a Level 125 Great Wyrm, one of the most powerful monster classes in the game. Give her a good weapon and watch her deal thousands of points of damage with one attack.
Main Hero B
A masochistic angel met in Axel Mode, Axel inadvertently saves him from being eaten by demons, much to his disappointment. He then joins Axel's party.
The Masked Servants of Zenon
Though Zenon is reclusive and does not even meet with his minions, he does have two trusted servants: The masked generals Shura and Selion. Both are quite powerful and have apparently served him loyally for years, though they are unemotional and muted. He tasks them with finding Rozalin and bringing her back, but when Selion finds Adell's group, she has an attack of sympathy and hides the information from her master. Throughout the story, they quietly do their best to help Adell's group, though they do not know why and cannot oppose Zenon directly.

WARNING — the following character profile is full of unmarked spoilers for the end of the game. 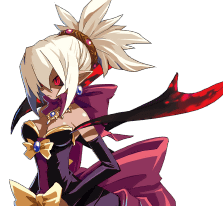 After the tournament, questions begin to arise about whether the man the group have been searching for and just confronted is actually the true Zenon, especially after he was easily defeated by Etna and treats Rozalin quite callously. It turns out he isn't Zenon after all. The real Zenon, after defeating all those Overlords and Demon Lords fifteen years ago, realized she had become too monstrous and powerful. Thus she reincarnated herself as Rozalin, sealing her true power and her memories. The fake Zenon raised Rozalin as his daughter in an act of petty vengeance and assumed Zenon's identity, keeping her isolated from the outside world to control her and keep the True Zenon from returning. Unfortunately, when Laharl shatters the magic seal Rozalin produces to prove her lineage to Zenon, he unleashes True Zenon once again.