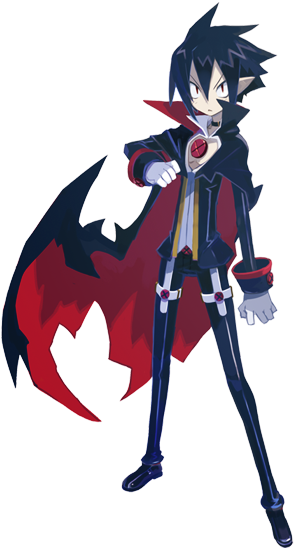 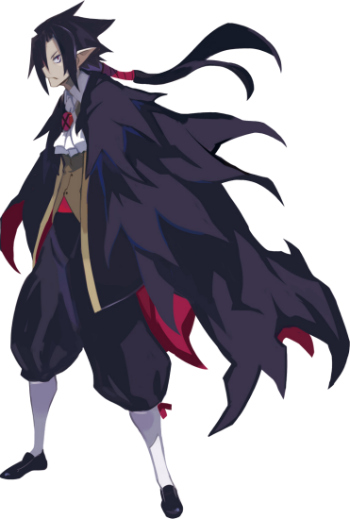 The Protagonist of Disgaea 4. Valvatorez is a vampire who was once known as "The Tyrant" for his incredible power. However, after a certain incident he refused to consume human blood, which caused his powers to rapidly decline and his eventual demotion to a lowly Prinny Instructor in Hades. Despite this he takes his demotion in stride, and although he can be a bit of an idiot at times he possesses a ferocious and unbreakable sense of demonic honor. 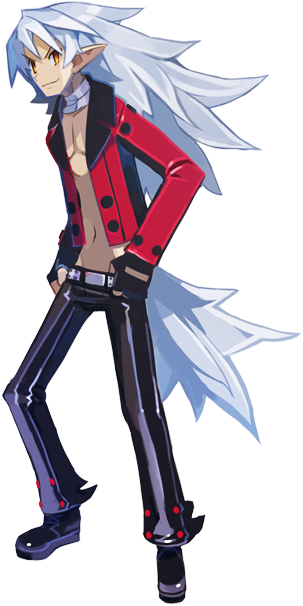 A cunning Werewolf who acts as Valvatorez' attendant. Completely devoted to Val, he would like nothing more than for his master to regain his former power and rule over the Netherworld as The Tyrant, and engineers several plots to ensure just that. 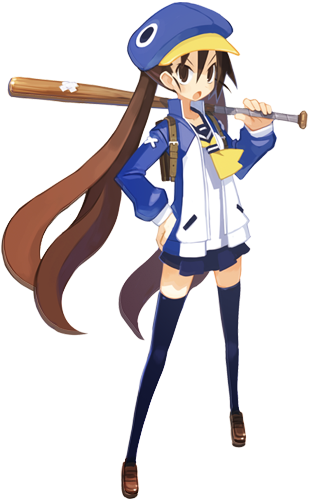 A middle-school student who died and was sent to the Netherworld. She was supposed to become a Prinny, but due to a shortage on Prinny suits, she just had a hat and jacket slapped on her instead. She is under the impression that her experience in the Netherworld is All Just a Dream and believes that she should be able to do whatever she wants because of it. Her father was the one who created Desco based on the dying plea of his late wife, who told him to fulfill Fuka's childhood wish: "To have a little sister... with advanced functionality, to help [her] Take Over the World". She was killed by Desco's successor, Des X, out of jealousy and sent to the Netherworld because Ambition Is Evil.

A Cute Monster Girl created to become "the ultimate weapon that would destroy the world". Her official name is Final Weapon: Death/Extermination Submersible Combat Organism. Despite her incredible power and impressive evil laugh (she practiced!), she's more like a naive child than anything else. Valvatorez takes her under his wing to teach her how to achieve her ambition of becoming the Final Boss of the game. She was created by Fuka's father to fulfil Fuka's childhood wish of "a little sister... with advanced functionality that will help me Take Over the World". She is killed by Des X out of jealousy and cast down into the Netherworld, where she is sealed deep within Hades. 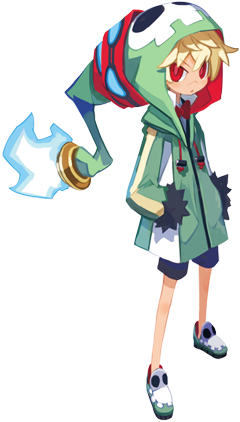 The only son of the current Netherworld President. He's the leader of the Abaddon, a special assassination force that works directly for his father, and also holds the position of The Grim Reaper, though he has never taken a human soul before. He's not aware that he's only riding his father's coattails. When it's finally made clear that nobody actually takes him seriously, he joins the party to prove himself to his father.

An angel from Celestia known as "The Angel of Avarice" for her ruthless greed. She claims to have come to the Netherworld to collect on a hefty HL debt, and doesn't care how she gets the money. She looks identical to Artina, the human girl whom Valvatorez failed to protect after promising he would not drink human blood until she feared him. Valvatorez refuses to believe they could be the same person, a notion she supports by using the cover name of Vulcanus. 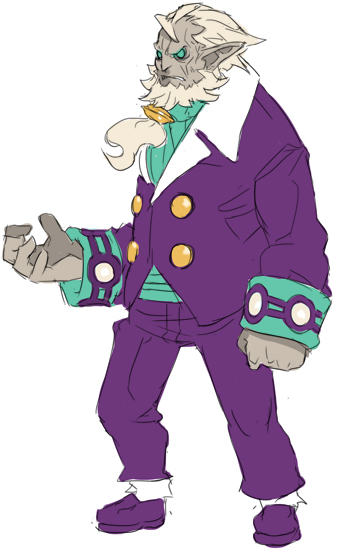 The 61st President of the Netherworld and Emizel's father. Valvatorez launches a campaign to remove him from power after a number of abuses of the Corrupternment come to light, such as the elimination of all Prinnies, imprisonment of "innocent" demons, and the dumping of toxic waste from the Human World into the Netherworld. Valvatorez and the others have no idea what he's thinking allowing these abuses, especially since he actually has a good reputation in Celestia.

An artificial demon created by Fuka's father. She is an advanced version of Desco, described as the "true final boss". She was responsible for killing both Fuka and Desco. After the events of the main game, Genjuro makes a few modifications to Des X to instead make her Earth's Guardian. To reflect this, her name is changed to Earth X.

Axel is a returning character from Disgaea 2. Formerly known as the Dark Hero, he traveled to this Netherworld to 'dye it in his colors', but forgot what he was supposed to be doing and ended up the warden of Hades instead. He's still incredibly incompetent, vain, and dim. He's a recurring enemy in the first half of the game.

Fuka's father. From what she says about him, he's always working and never visits her. He turns out to be a researcher from the human world that is funded by Nemo, and he's also the creator of Desco. It's ultimately revealed that his research was to fulfill his late wife's last request, which was to fulfill the wishes of Fuka. Those wishes were having a little sister and taking over the world — not that she remembers.

Artina's mysterious supervisor, who recruited her some time after her death. She's actually Flonne, the well-meaning but largely brainless angel from Disgaea 1 who had a brief stint as a fallen angel before being promoted to an archangel in Disgaea 3's Raspberyl Mode. 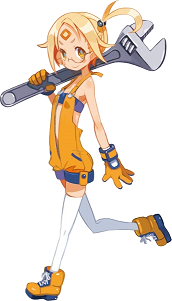 A new character introduced in the Updated Re-release. A mechanic trying to end a war, said war being the war held 400 years ago in which Tyrant Valvatorez and Artina met. She calls upon Fuka and Desco (perhaps by accident) to help her in her mission.