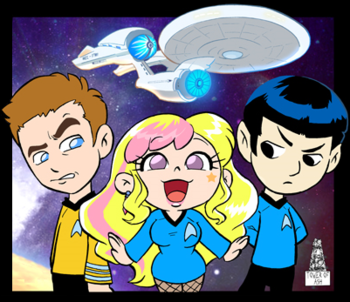 "Ensign Mary Amethyst Star Enoby Aiko Archer Picard Janeway Sue is the youngest officer in Starfleet. A skilled linguist... an unmatched warrior... a cunning strategist... a scientific genius... a gentle healer... a passionate lover... She is a woman of exceptional beauty; bubbly, pure of heart and perfect in every way...

...and she's driving the crew of a certain enterprising starship INSANE!"
Advertisement:

So begins the tale of Ensign Sue Must Die. A Webcomic drawn by Kevin Bolk of Interrobang Studios and written by Clare Moseley of Clare Moseley.ca

. The story takes place in the Star Trek universe after the events of the 2009 revamp film which follows the Starship Enterprise's new medical officer Ensign Sue. The comic completely parodies the concept of a Mary Sue character. Can currently be found on Moseley's site: the original

The original comic was made in a short newspaper comic format, and was fairly light-hearted and uncomplicated, being entirely self-contained. After that comic's great success, the format was doubled to two rows of panels (aside from a few full pages), and the story got much broader and deeper, and was turned into a Two-Part Trilogy. While the original had no particular message about Mary Sue characters, the sequels go into extensive depth on the topic, deconstructing the original Mary Sue character, providing her with a backstory, and also providing some surprising insights into the Star Trek universe, including captain Kirk himself and the nature of both fanon and canon Sues.